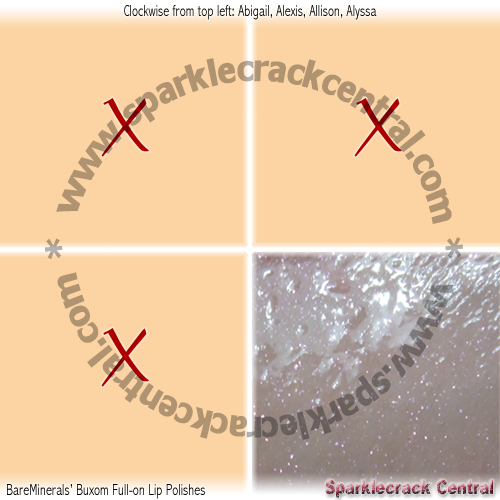 At some point in either late 2013 or early 2014 (I think the latter) the Buxom lineup was revamped. The separate groupings for Diamond buxoms and Full Color buxoms went away, and instead of a total of 50 lip polishes, there were now 100. Many of the original “original” collection stayed in there, but not all - some of the lesser performers, like Kitty, were axed. Some colors from the LE kits were made permanent - though not all with their original names or accompanying artwork. Instead of one purplish shade, Dani, there were about a dozen various tones of lavender, lilac, and straight-up purple. The old unofficial system of determining a shade’s opacity by looking at what the “model” was wearing - gone. (When the original “full-color” buxoms came out, their drawings were all fully clothed while the original “sheers” buxoms were all in various types of lingerie.) And the Buxom displays at most stores have 20-30 colors out at most - and, of course, over half of those are the older shades, the ones that anyone who’s been an aficionado since the line launched, will already own.

(In the photos below, if there’s a red X over a swatch’s space, that means I have no plans to buy that color. Really want me to swatch it? Send me $10 using the Paypal donate link, and when Ulta’s 10x points sale rolls around, I’ll buy it and get myself points at the same time.)

I love the Buxoms. I really really do. I originally wasn't going to buy too many of the new shades. Then the embargo slipped because Purples. And then...a few of the more vibrant reds, too. And when I swatched one color that was essentially a sheer with a very very faint tint, I decided to try and swatch as many of these as I could - so that others won't have the same frustrations that I did, trying to decide which shades to get and which to pass on by.

(Colors with a (II) designate re-used names and changed colors; colors with (*) designate carryovers from the original line)

Get tight knots out of your hair by applying conditioner and running a wide comb through wet hair. Then rinse, use shampoo and condition again. - Lisa Carrick