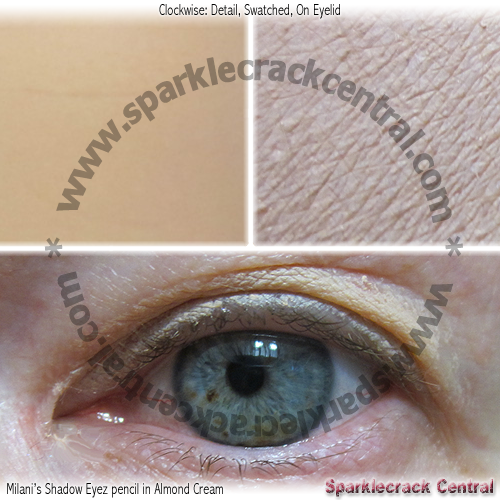 I only really have eye pencils - jumbo ones - from six different vendors: Cherry Culture (avoid like the plague, they suck), Tarte (good quality but pricey), Stila (same), NYX, Sephora, and Milani (all three are great quality, and don't cost over USD$20 per pencil.) I don't know that I'll get too many more because while I love my eye pencils, to me their use is limited to laying down a color-layer that may to may not show from underneath eyeshadow. They don't give me much in the way of fine control, and the good ones don't smudge or blend too easily, so you really can only use two base colors in one look because you have to blend those things fastfastFAST before they set. On the other hand, they travel very easily, more easily than many makeup items - and if you're packing with a keen eye toward both space taken and number of items packed, it's a lot more efficient to pack a single eyeshadow pencil than a cream shadow and a brush.

Most of my (current) favorite shadow pencils are Milani. Their color selection is smallish compared to NYX or even Sephora; but the quality is fantastic. I wish they had a wider range of colors, or that they had a matte white in their regular lineup…but, eh, worse things have happened. And I made sure to get backups of the LE and discontinued shades, so I'm set for quite a while. NYX is a great low-cost eye pencil. The only gotcha there is that they're not generally sold with outer seals of any kind, so often I have to be very careful when shopping in person to get one that hasn't been someone's tester. Sephora is good quality, but they're expensive - more than three times the cost of NYX's pencils, and twice-and-a-half times as expensive as Milani's. I managed to keep this list to under a dozen…but only just. I also noticed, while assembling the list, that three of the colors I love are discontinued. Admittedly I knew that they were a limited-edition collection, and so was able to get backups.

<p>In alphabetical order:</p> <h3>Milani's Shadow Eyez in Almond Cream</h3> <p>Milani has some really great quality shadow pencils! The Almond Cream shade is such an excellent "nude" base to help brighten eyeshadows without changing their essential color. The other lines' shadow pencils are either duller, or are a frostier finish, or lean more decidedly warm. This has peach undertones rather than gold, so I can wear it very easily.</p> <h3>Milani's Shadow Eyez in Espresso Line</h3> <p>A deep brown that's on the verge of being a black-brown. It's a bit overpowering as a standalone shade, but used as an accent or like an underpainting (I sometimes will put this under an outer crease color to give the color a little more depth without applying too much shadow) it works very well...especially since, in pencil form, I can get a little more precision in placement than I can with most brushes.</p> <h3>Milani's Shadow Eyez in Midnight Romance</h3> <p>Rich velvety purple with a good deal of glitter - not thick enough to look like a solid second layer, but not incredibly sparse and scattered either.</p> <h3>Milani's Shadow Eyez in Snowy White</h3> <p>My personal "definitive" white matte. It's close to brilliant white, and it leans just a tiny bit cool. It's a great base! And it was limited edition. (Dammit...)</p> <h3>NYX's Jumbo Eye Pencil in Cherry</h3> <p>Just this side of blue-red with a cream finish and excellent staying power, with no staining. Not too many eyeliners, cream shadows, or eye pencils are a great primary-red shade. I was surprised and happy to find this one in the NYX lineup. And, of course, it (along with hot pink, primary orange, and primary yellow) was eventually discontinued.</p> <h3>NYX's Jumbo Eye Pencil in Oyster</h3> <p>A muted white pencil. I like using this as a "white" base when I want the brightening, but not perhaps so vividly brightening as using Milk. I wish that it was more of a matte finish, but the cream finish isn't too reflective.</p> <h3>NYX's Jumbo Eye Pencil in Pacific</h3> <p>I love periwinkle blue. It isn't necessarily the very best color for my eyes, but that doesn't stop me from trying to make it happen. Pacific is a brighter periwinkle, but there's some of that "Cape Cod beach-house" color sensibility in there. I use this as a color base for neutral or greyed eyeshadow looks.</p> <h3>NYX's Jumbo Eye Pencil in Strawberry Milk</h3> <p>When you want a slightly softened bright pink, but faded rose won't do.</p> <h3>Sephora's Colorful Shadow Liner in Khaki</h3> <p>Sage-olive green that looks really good with my eyecolor. The shade intensity is even close, and the pencil has a grey-ish base, so instead of overpowering the blue, this complements my eyecolor extremely well! I don't often think to grab this pencil, but whenever I do I spend some time marvelling at what a good match it is. (I don't often think to grab it because I'm either wearing colors that won't match well with green, or I'm just in a rush so will grab whatever is nearest.)</p> <h3>Sephora's Colorful Shadow Liner in Lilac Shimmer</h3> <p>This is as close as I can find to the former Sephora Flashy Liner in Flashy Mauve: kind of a sterno-purple. The medium lilac base has a fairly heavy blue interference effect, which reflects the light but also doesn't make the skin (or the eye area) look sallow or irritated. And it's in thicker-pencil form!!</p> <hr /> <p>A notable absense from the above list? NYX's Milk - a pencil that many regard as an absolute staple. I do have Milk, and do use it. I just use it less frequently than these other pencils. I wish that Snowy White was part of Milani's regular lineup, because I like it better than NYX Milk. Milk's finish is almost matte, but not quite. Snowy White is most definitely, decidedly matte. I get the same color-brightening results without the "war" with a satin finish. Milani shadow pencils also set better than NYX's, in my experience. The caps tend to stay on better, and not crack as easily, which is another reason for my preferring Milani to NYX. I do also have black eye pencils that I use from time to time, but I find that when I want to give an eyeshadow look a dark background, I'm happier using a deep brown shade rather than a black pencil.</p>

Between applying each coat of mascara, dip a Q-tip in baby powder and run across your lashes, focusing on the tips. The second coat will attach to the powder for a longer, fuller look. - LoveBeautyNglam