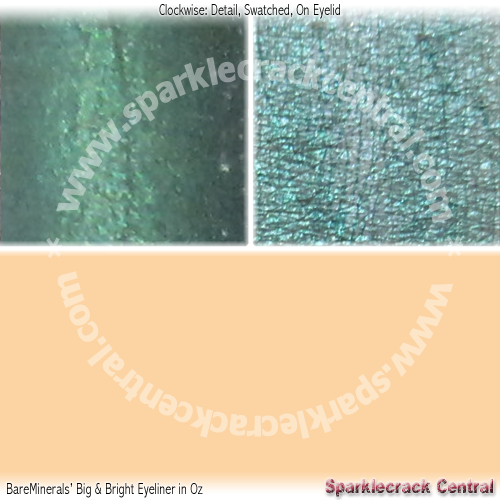 I am an eyeliner pencil fanatic. Sure I have a lot of jumbo eye pencils/eye crayons, but I have a lot more eyeliners. Cream, gel, stick, pencil, liquid, marker…I tend to prefer pencils, then sticks, then gel/cremes, but I'll look at just about any eyeliner. I also love to cheat as I like using both loose powders and cream bases as liners.

I like eyeliner pencils and sticks because, compared to liquid or pot/gel liners applied with a brush, they're easier to use. Or should I say, “more familiar to use.” Since about the first year of formal schooling, we've all been extensively taught how to use pencils and pens to make detailed, precise lines in certain forms and shapes. Working with brushes…well, there's art with watercolors, but most kids don't start learning to use brushes to write unless you live in a culture where brush calligraphy is Still A Thing.

I also like eyeliner pencils and sticks because they're self-contained. Pop one in the backpack, handbag, or pocket, and you're set for the day. With eyeliner in pots (like fluidliners) you've got to worry about packing an applicator, and then making sure you can FIND that applicator if you need to touch up. (This is not easy to do in a handbag, let alone a backpack or computer bag.) Add in the whole “crayons for grownups” factor, and it's easy to see why the pencil/stick eyeliner format is a big hit with lots of people.

<h3>BareMinerals' Big and Bright liner in Oz</h3> <p>One of my favorite eyeliners from BE's Big and Bright lineup. So, of course, it's not only limited edition, but was released toward the end of this lineup's lifespan, so it never got a chance for a re-release.</p> <h3>BareMinerals' Round the Clock liner in 8pm</h3> <p>A good, rich black-brown creme. I occasionally like having super-defined eyes with a strong color, but even then straight black liner is usually a bit more than I care for. A blackened brown or a really dark brown lets me smudge the color slightly if I want a softer version, but still gives me good sharp definition without overpowering my eyes (or face.)</p> <h3>Jordana's Cat Eyeliner in Brown Black</h3> <p>I've long had a..want-to-love/hate relationship with liquid liners. Most of it is centered on the applicators and my shaky hands, and thus the inability to make a nice neat line. These eyeliners have a great applicator, a good formula that dries to a liquid-leather-like finish, and they're under $5 apiece. How cool is that? The fact that they have a brown-black in their collection, rather than a brown, is an additional plus.</p> <h3>MAC's Fluidliner in Dark Envy</h3> <p>Deep teal-green!! I was thrilled when this and Dark Diversion were released. I like the fluidliners okay (the Lady Burd gel liners give me performance that's almost as good for a fraction of the price, and a wider regular color selection as well) but when I saw this one come out I jumped. The color looks good on me, it can almost overpower a look if I try a thicker line, but it really complements my eyecolor and overall coloring.</p> <h3>Sephora's Contour Eye Pencil in Suede Shoes</h3> <h3>Sephora's Contour Eye Pencil in Romantic Comedy</h3> <p>When I first noticed the collection, this and Banana Smoothie were the two shades that immediately caught my eye. Banana Smoothie is fairly good, but Romantic Comedy looks better on me. Hot pink generally does coordinate better with my coloring than yellow.</p> <h3>Stila's Waterproof Smudge Stick in Black Amethyst</h3> <p>Not many eyeliner collections have a red or even a burgundy in their lineup. Black Amethyst is not quite a blackened violet, more like a deep burgundy. The red tones are there, but not so overwhelming that it looks like the wearer's eyes are bleeding. (Generally not a look one strives for in one's day-to-day makeup.) The application is wonderfully smooth and even, and it most definitely stays in place all day without fading or flaking away.</p> <h3>Urban Decay's 24-7 Eye Pencil in Covet/Mars</h3> <p>I listed these together because when the lineup was refreshed, Mars was the "near-replacement" shade for Covet. Covet was just a little more blue/teal than Mars, but Mars is not a Kelly-green. It also leans blue, but more turquoise-green than teal-green.</p> <h3>Urban Decay's 24-7 Eye Pencil in Lucky</h3> <p>I was so glad to get this one before it was discontinued...though I probably should have gotten a few more backups. Lucky is a great metallic-rust that looks amazing with my eyecolor, has enough depth to define without being overpowering, and goes on very smoothly. And so of course it was discontinued. (UD's proposed "replacement" shade is not really too similar. It's an eyeliner pencil, and it's a warm medium-deep brown. How that's supposed to be a replacement for "metallic rust orange"...that escapes me.)</p> <hr /> <p>It isn't until you assemble lists like these, that I realized how much I gravitate toward green eyeliner...yet I rarely wear it. I'll more often reach for deep brown or (currently) a thicker charcoal. There are some eyeliners that I've only just begun trying this year - Colourpop, a new line at Sephora - that may make a subsequent top-ten list. I just haven't used them quite often enough to know if they'll be on my list of "favorites" or not. In my brief time using them, I love both lines.</p>

Put your mascara in your pocket for 10 minutes before applying...especially in cold weather! It warms the mascara and lets it apply more easily.