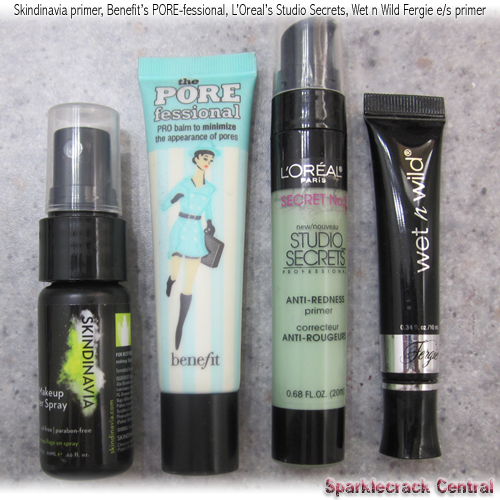 I'm almost embarrassed - beauty blogging for how many years now (finishing up year 7! Sheesh…) and I have done no comprehensive review of my various primers! Well, there's a project for 2016. In my defense, I only started learning why they were important in 2012, and I've changed the lineup a bit as I've figured out what does and doesn't work for me. So in three more years, this lineup may have changed again as new products and technologies hit the market, as my skin changes, and especially as I continue to learn what works best for me and why.

I've tried costly-ish prestige primers (USD$30 is steep for me but I wouldn't be surprised to find the occasional USD$50 primer lurking about somewhere), midrange, and various drugstore primers. The ones that ended up as favorites - even if for a short time - were all from the lower end of midrange, and drugstore. It isn't that the expensive primers aren't fine, and for people with chemical sensitivities they may be all that's workable.

For the longest time I resisted the idea of using any primers at all. It added more products to my routine, it added more time required, and what did they really do anyway? Well, now I know. If I don't use primers, my makeup will go on, but it won't stay on too long. How long my makeup will stay in place sans primer ranges from 30 minutes (hooded and oily lids) to 1 hour (lips - that's usually the point when I need something to nibble, or another cup of coffee) to 4 hours (face…and that number is lower on a very hot or damp day.)

Not everyone's experiences with (or without) primers will be the same as mine. Most folks find that an eyeshadow primer is virtually mandatory to make their eyeshadows last all day, but not as many see such a difference with an all-over facial primer. What's best for you? Your own preferences, habits, and skin condition will determine all of that.

<p>After cleansing and applying my serum and sunscreen:</p> <h3>Skindinavia's Makeup Primer Spray</h3> <p>I've only started using Skindinavia this last year, but once I started using it I really liked how much better my makeup looked and how much longer it looked that way. Skindinavia is the company that does a lot of Urban Decay's various primers and skin-sprays, but with Skindinavia, their 8-ounce bottle is a better deal than UD's. Their site also often has sales, too, reducing the price even further. (I also jumped at the chance to get free travelsizes of the primer and setting spray, because they truly are much better for travel.) I've heard of many people who use their setting sprays as a foiling medium, to help their powder foundation and eyeshadows go on more vibrantly and stay in place longer. I don't know if I'll try that, but I definitely love Skindinavia's primer.</p> <h3>Benefit's POREfessional (spot application)</h3> <p>My pores are larger than I would like them to be. They're not huge, but I wouldn't mind if they were just a tiny bit less noticeable. Enter this stuff. It's another "spot-use" primer for me, rather than an all-over primer, because I don't love how it feels on my face. If I use it sparingly on my cheeks where the pores look the largest, I get some fill and evening-out but don't feel like I've Got Makeup On(TM). I have tried a few other primers, mostly drugstore options - Black Radiance, NYX - but this one works better for me than those do.</p> <h3>L'Oreal's Studio Secrets Color Corrector (spot application)</h3> <p>I have redness around my nose and mouth, and occasionally my cheeks are a little too red. (Don't know if it's rosacea or not - it's never bothered me enough to want to get it checked out.) If I wear my foundation without this to cancel out some of the red, it shows through. But if I dot this on the reddest areas and spread it in, I get nice, even coloring. I've been using green color correctors at least since 2010. I started out using indie loose powders and was very happy with them, but switched over to a cream formula when I started using BB cream instead of loose-powder foundation. This is not inexpensive for a drugstore product, but it takes me a year to get 3/4 of the way through one bottle. You don't need much of this to get really great color correction.</p> <h3>Wet n Wild's Fergie eyeshadow primer</h3> <p>Before this came along, I used Urban Decay's eyeshadow Primer Potion exclusively. I'd tried Too Faced's Shadow Insurance, and it was okay, but UDPP worked better. Then this came out at about 25% of the price for the exact same amount. This, folks, is what is called a "no-brainer." I had also tried some indie primers, but wasn't happy with most of the results I received. When I did find one that I liked A LOT, the company got sold and that primer got discontinued.</p> <p>The cons about this primer are that while it holds my eyeshadow 13+ hours, I can't truly get 16 hours out of it. If I'm doing an evening thing as well as daytime somethingorothereth, I'll have to either touch up my night-time eye makeup, or reapply. Additionally, this one is prone to separating while in the tube. It's easy enough to mix back up and get more use out of the product, but it's something to be aware of.</p> <h3>What about a lip primer..?</h3> <p>I haven't adopted a regular-use lash primer, and I don't know for sure that I will. I'm trying out three different lip primers right now to see which works best for me - Bite Beauty, NYX, elf, and Colourpop - and I hope to have writeups of those available later this year. My lipstick does last a bit, but I have this fantasy of being able to wear a lip color for six hours without having to touch it up. (That's without eating, which plays merry havoc with just about any lip color...but if it lasts through that, excellent!)</p>

Soften a too-rich lipstick by blotting and then dusting your lips with finishing powder. (This also helps set the color.)

The predominant color in this polish is a metallic warm olive. It looks initially like it might be close kin...   Read more »

Perrie isn't a pink, but it's such a warm purple that it almost looks like a very cool rose in...   Read more »