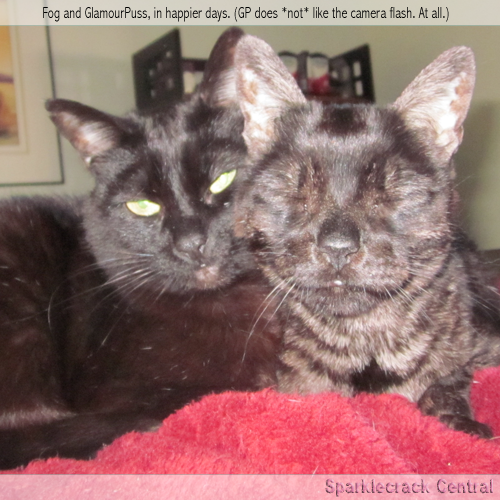 GlamourPuss, who I've talked about before (he's the kitty who's been having seizures) is the low-status cat in my household. Between being a neutered male, having only four teeth left after a near-TME, and now having the very occasional seizure for the last three years, he has almost no status. He does occasionally have staring contests with Monkey, my eldest cat, and she will run and he'll chase her for a bit. And for many many years, Fog (kitty #3) would groom GlamourPuss and they would occasionally cuddle up.

That changed when BabyJ arrived in April 2012.

GlamourPuss is a black-smoke tabby - meaning his undercoat is near-white, and has grey-and-white tabby markings. He's also always been physically the smallest of my three cats. For whatever reason or series of reasons, he's always been fascinated by me painting my nails, swatching my eyeshadows, putting on makeup…you name it. I think part of it comes from the master bath being relatively small, so if he gets in there first and sits on the toilet seat, the other cats won't come challenge him for the spot. Then he gets to be physically closest to me. It's his own oddly cute passive-aggressive way of asserting that, while he's the lowest in the feline heirarchy, he knows he's my favorite.

BabyJ is a shelter-adoptee (as are all of my cats, except Monkey, who was a feral-rescue vet adoptee.) BabyJ has a thick silky black coat, a white spot on his throat, l-o-o-o-ong legs, and broad shoulders. I've had him since April, he turned a year old in October, and he's the largest of all four of my cats. He has this nasty habit of ambushing Fog, and Fog growls and runs, but won't turn and fight him. The incidents have lessened, but Fog still gets harassed. She's also pretty much stopped grooming GlamourPuss. I know that cats will constantly jockey for status, and changing the cats in a household is going to cause more stress. But it's been nearly a year. GlamourPuss hasn't continued to lose weight, has actually gained some, but he is definitely the “periphery-cat” now. He stays up in my room, except when it's oh-food-thirty when he comes straight down and heads for the bowl. He's even stopped sleeping at the foot of my bed.

When I first brought BabyJ into the house, Monkey was the Problem Child. She was most emphatically not happy to be sharing space with such a young, boisterous cat. I had to rip up the carpeting in the office. But I got two more litterboxes, took the covers off all of them, and began keeping BabyJ in the closed library when I was at work. All the cats would eat in the mornings and evenings at the same time, they would all follow me upstairs at bedtime, they staked out “their” levels in the house. Things…calmed down somewhat. Monkey, my eldest cat, has BabyJ cowed for the moment. BabyJ does not make direct eye contact with Monkey, and whenever she thinks he's starting to forget that he's not AlphaCat, she'll raise a paw or suddenly feint toward him and he'll dodge aside and look away. But…Fog hasn't learned whatever tricks Monkey used.

Things are better, and they're even calmer when I use the Feliway spray. I know that, starting next fall (right when I get home from DragonCon!) BabyJ will hit two years. That's when cats mature socially, when they start pushing the boundaries. Essentially, this is a cat's “teenage” years. I remember GlamourPuss' Terrible Twos - we were living in Vancouver, in the 2nd-story apartment L-shaped 1-bedroom apartment with a deck. GP would run in circles: bedroom, out the window, onto the deck, in the patio door, into the bedroom, lather, rinse, repeat…for hours. I predict that BabyJ's Terrible Two year will be a bumpy ride, and if necessary I will go back to keeping BabyJ in the library for a few hours a day, to give Fog a break. (I'm already planning on boarding BabyJ at the vet's, in their kitty-townhouses, the week that I'm visiting my parents and when I'm at DragonCon. I feel this is the best way to maintain feline sanity.) I'm hoping that once BabyJ passes out of his Terrible Twos, everyone will reach near-equilibrium. I hope that Fog will feel comfortable enough to cuddle with and groom GlamourPuss again.

But until then, I've still got my swatching-buddy.

Tomorrow we return to beauty-schtuffs. Promise!

Today I’m giving away three colors from Concrete Minerals: Hearts, Seance, and Vanity. Hearts and Seance are two of my absolute favorite shadows from CM. Vanity will combine well with them, so that you could have a complete look using these three shadows. Giveaway widget is below, visible to logged-in members.

Put your mascara in your pocket for 10 minutes before applying...especially in cold weather! It warms the mascara and lets it apply more easily.