The site is in mid-migration now (manual migration of over 7,000 entries, so there's a lot to be done.) The entry stubs are created for older content, but for the most part, the actual content isn't there quite yet. I am working on it. Unfortunately I have no ETA. But feel free to link to any page! When the content does get populated, the URL will stay the same.

On August 23 2010, I went to downtown Seattle for an open photo shoot in support of the NOH8 Campaign. I was minorly concerned, as 1) I haven't done any photos other than my driver's license since my senior-year school photos; 2) I've never done an open photoshoot before and couldn't come up with intelligent creative pose ideas (until after the event, that is - of course); and 3) I'm generally about as dynamic as carpet lint. Still, this is important to me. While the central issue is to overturn Proposition 8 and to legalize same-sex marriage, to me it's a simple basic matter of equal civil rights. I wasn't born when people marched in Selma in support of civil rights. I also, by virtue of being older than the internet but still a young pup, missed out on most of the peaceful landmark protests for equal rights. I vote, and at one point I did get myself ordained; but I don't have the legal right to officiate at legally binding marriage ceremonies nor do I have a massive influence on the laws that are passed. Women and many minorities haven't had equal legal rights in this country for very long, only for a few generations…and it could all be taken away so easily if people don't keep standing up for the overall principle of legal equality, not just equal rights for their own group. So whenever there's a chance to show my support - especially this way, which does not require a whole lot of effort on my part (I didn't have to march for miles and risk objects being thrown at me, for one) - I'll do it.

Part of the instructions included "wear a white shirt" (to match the photos' theme) and "come photo-ready". To me, with my admitted lack of experience, this meant "come wearing makeup that won't disappear under a camera". After doing an admittedly small amount of research, I went out and bought a non-mineral foundation specifically for this occasion. I experimented with application, re-learned how to apply liquid foundation, and when the day came, I put on my makeup and headed downtown. Here's what I wore:

...I didn't bother with much, because I knew they were going to put a piece of duct tape over my mouth. I just put on a light quick swipe of Cover Girl LipSlicks in Nude so that I didn't look quite so unfinished riding the bus.

I can't recall exactly which color I used, only that it was a dark gunmetal grey. I don't think it was Sally Hansen's Petal to the Metal. I know it wasn't Sally Hansen's Opulent Cloud. Ah, well - when I do remember, I'll post which nail polish I wore that day. EDIT: I remembered!! I wore Zoya's Freja.

Here's how the photo turned out. My usual light-ish application, plus the amount of photoshopping done on the photos (changes in levels and saturation, to get all the photos to have the same look), kind of washes out most of my makeup...but it's there. 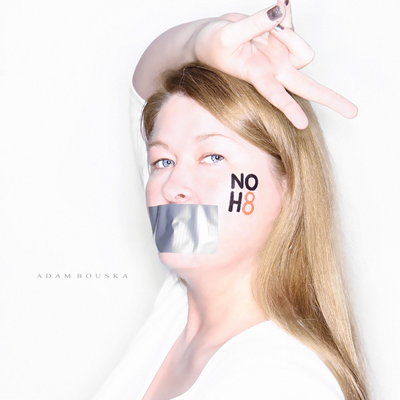 Since that photoshoot - which was one of the larger photoshoot crowds to date - they've introduced the ability for people to buy the temporary tattoo, take their own photos, and upload them to the campaign site to show their support. I may buy a five-pack and get one of my photographer friends to quote me the price for a photo shoot...only this time I'll be a little more prepared, and possibly I won't adjust the photo quite so much :D You can sign up for the campaign at their site, see when they might be having an open photo shoot in your city, and upload your own photos in support. (And you can see my photo larger, if you want.)

or look at other entries tagged with


Between applying each coat of mascara, dip a Q-tip in baby powder and run across your lashes, focusing on the tips. The second coat will attach to the powder for a longer, fuller look. - LoveBeautyNglam

This is an interesting collection. The colors are “early spring” and “early autumn”, rather than being shades I traditionally associate with Christmas. It’s nice to have a seasonal collection

A slightly greyed, autumnal purple…if there is such a thing. The formula is a very good consistency, going on evenly and self-leveling very well. The metallic finish shows some brushstrokes, but not too strongly - more like a faint suggestion.

This isn’t my favorite purple, but it is a unique-to-Zoya shade.