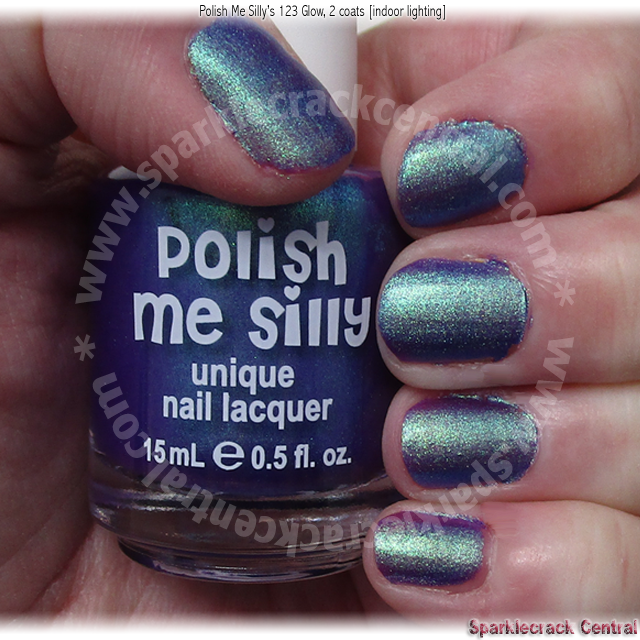 A group of multichrome polishes with an interference “glow” layer. Sometimes the multichrome shift is minimal; sometimes the interference layer is thinner; sometimes both are slightly muted. I bought just over half of these polishes - choosing the ones that looked the most interesting to me, after seeing more “in action” shots of them on various bloggers. Most of these polishes need three coats for full opacity and maximum color effects. A few needed four, even fewer were fine with two.

Of the polishes, Mylar Glow turned out to be the biggest disappointment. No matter how carefully I shook it up and mixed it, by the next morning it had separated again. I don't want a polish that requires 10 minutes of vigorous shaking every time I want to use it. Martini Glow was The Pleasant Surprise: it had very attractive shifting effects that I ended up liking a lot more in person than what I saw in photos. Glow Party shifts between so many colors! And Magic Glow is like the softer version of Glow Party, in that it has a lighter base shade and shifts through the brighter portion of the spectrum. Most of the polishes do have a shift, but there were some polishes where the shift was visible less frequently, or I disliked the predominantly visible color.

After I bought Mylar Glow and had problems with it, I contacted the shop owners to ask if anyone else had reported issues with their Mylar Glow separating, and needing four coats before I saw even the smallest amount of colorshifting. I was willing to believe that I'd just gotten a bad batch. Instead, I got instructions to use multiple coats of polish. <sarcasm>Gee, thanks! In the 15 years that I've been regularly applying nail polish every week I've never ever thought of that!</sarcasm> Future orders from PMS had a note added to them, letting customers know that these polishes required at least three coats....and no word about Mylar Glow separating like fuck-all. While I love Glow Party and Martini Glow, this interaction has pretty much finished my time buying from them.

The Glow Pop polishes were released in three groups. They're sold in three separate sets, as well, for anyone who wants to buy all of the polishes. The groups are:

or look at other entries tagged with Brand: Polish Me Silly, collection, released: 2020

Start with the minimum amount of your chosen eyeshadow, then build up. It's easier to add than to take away! - beautybytes